If the cancer cell at least on his debut "does not bring any trouble", because it at a certain point leads to death an organism other respects healthy?

The explanation must be sought in the dynamics of the cancer process that is not only explained by the formation and presence of the cancer cell.

And it’ composed of at least two distinct and opposing.

In the first stage can be to include all stages up to now described:

– aggregation of the vesicles.

– transformation of the aggregates in cancer cells.

– maturation and evolution of cancer cells.

– formation of the tumor.

Come this far the cancer is still a real problem, demonstrated by the fact that many patients living with it for years without realizing they are sick.

If cancer patients do not notice immediately the disease most likely the problem is not in this first phase.

The severity of all solid tumors in fact not in the cancer cell alive but in that dead.

The cancerous process is actually composed of a second phase, reverse the previous.

The tumor cells are in effect living organisms and as such have a life cycle that is a birth and a death.

What happens during the process cancerous?

When forming the tumor, inside it is composed of cells very old that after completing its life cycle alone die of old age.

They are rotting in the body with a rotting similar to rot after-death.

This triggers a particular and very specific phenomenon.

The tumor mass rotting produces a series of "debris" and putrefaction bacteria, some of which have a very particular function: stimulate reaction vesicular cells still healthy.

In this way closes the circle.

– The cells still “sane” are stimulated to produce new vesicles that riaggregandosi produce the next generation of cancer cells that are added to the previous.

– Even these new cancer cells, finished their life cycle, die in turn.

– Their death is still producing a new wave of rotting tissue in addition to the previous and the circle closes again.

Then the body will generate waves cyclically increasingly large and frequent of these particular "debris" creating a perverse mechanism that feeds on itself in waves more and more strong and massive until the death of the organism.

The cancerous process in its salient features is all here.

In the diagram below shows a summary of the entire design process. 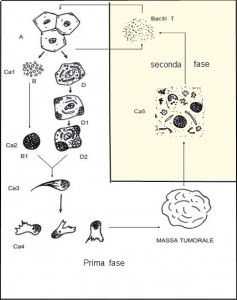 CA1(B) Ca2(B1) = Evolution of the vesicles that aggregate outside the cells.

Producing bacteria of putrefaction and "debris".

Summary of the stages of the cancer process

The first phase is characterized by:

1-Vesicular reaction of healthy cells, produced and stimulated by the presence of bacilli T.

3-Formation of the tumor.

The second phase is characterized by:

4-Death and putrid decomposition of cancer cells that make up the tumor mass.

6-Cachexia, generalized putrefaction of the whole organism and subsequent death.

In a healthy body, cells die too but unlike a body bioenergetically weak, they are "absorbed" by the body just as in a healthy economy and thriving staff laid off by a company is reabsorbed and taken to another.